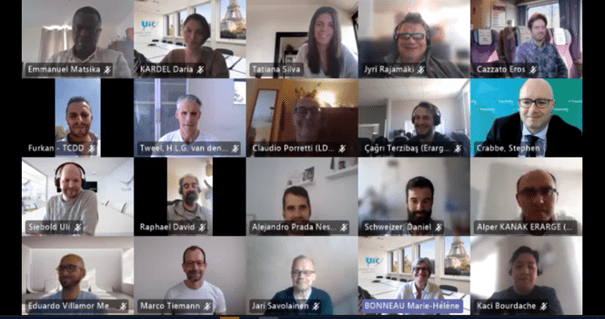 The second simulation exercise of the SAFETY4RAILS EU project was co-organised by ERARGE, EGO and TCDD. The event took place online on the 27th and 28th April 2022 with 58 representatives from the SAFETY4RAILS consortium.

The main objective of this event was to demonstrate and evaluate the functioning of the latest version of the SAFETY4RAILS Information System (S4RIS) platform with its contributory tools, based on a scenario of a combined cyber-physical attack on one Ankara metro station. The simulated attack was designed around two key events: an intrusion in an important room leading to a cyber-attack and an explosion of a luggage abandoned by a terrorist. The simulation involved technical capabilities to address the four stages of the resilience cycle:

To demonstrate this, several S4RIS tool provided simulations of their capabilities to respond to the scenario. The exercise involved 9 tool providers:

To sum up, during the detection and response phase of the simulation, several tools provided information to create situational awareness: Ganimede detected an abandoned luggage and raised an event of it, PRIGM – Sensation detected the intrusion to the important room by checking various sensors, and TISAIL/OSINT discovered the exposed CCTV and sent the event to S4RIS. CuriX (Cure infrastructure in XaaS) detected the drop in the electric power consumption and created an event. TISAIL/OSINT also generated a social media message report regarding a reported explosion. DATAFAN performed a passenger flow analysis of the connected stations to detect possible anomalies.

The events raised were presented to the operator in the S4RIS (RAM2 GUI), where correlation between existing and incoming alerts were performed and details of the alerts presented. The Security Coordinator received the alerts and demonstrated immediate action to take, supported by the advanced crisis management capabilities of S4RIS Decision-Support System (RAM2).

The entire simulation was created to demonstrate the capabilities of the tools, considering actual and/or potential security threats and their combinations. However, it was not based on any previous or actual operational event(s) occurring within the organizations involved in the simulation.

The next simulation exercise will be organized by Leonardo (LDO) and hosted by Rete Ferroviaria Italiana (RFI) on 31st of May and 1st of June. In the meantime, feedback from the end-users will help to improve the tools and reach a new step with another set of operational data and even more tools integrated in S4RIS platform.

The information appearing in this article has been prepared in good faith and represents the views of the author. Neither the Research Executive Agency, nor the European Commission are responsible for any use that may be made of the information contained in this abstract.