On 28 September 2022, the SAFETY4RAILS consortium successfully organised its final conference at the UIC headquarters in Paris (France) and online with the participation of more than 80 partners representatives, Advisory Board members and external guests (about 50 attendees at UIC and 30 participants online). The conference marked the conclusion of SAFETY4RAILS, an EU co-funded project which was carried out by a consortium comprised of 31 partners from 13 different countries for a duration of 2 years (started on the 1st October 2020).

SAFETY4RAILS aimed to increase resilience against combined cyber-physical threats including natural hazards to railway infrastructure. Throughout the day, the consortium presented the results of the project, notably by demonstrating with a hypothetical scenario the roles and functionalities of several tools of the SAFETY4RAILS Information platform (S4RIS), and outlined plans for future work.

The final conference was introduced by the Project Coordinator (Stephen Crabbe, Fraunhofer EMI), following the welcoming of UIC’s Head of Security Division (Marie Hélène Bonneau). The Coordinator presented an overview of the project, including its objectives, approach and results. 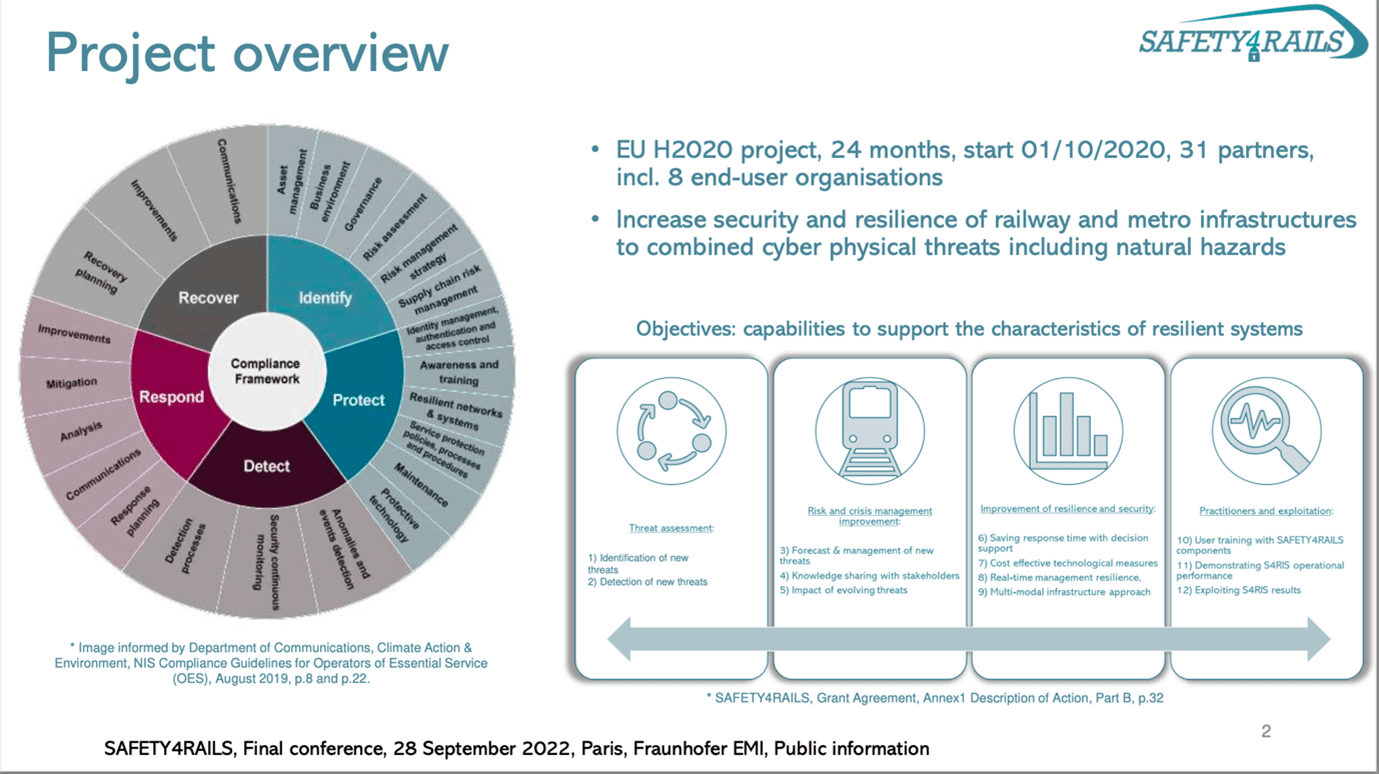 In a nutshell, the project approach was to focus on the combination and extension of 19 contributory tools provided by technical partners which were mostly at a Technological Readiness Level (TRL) 5-6 (i.e. technology validated/demonstrated in a relevant environment, but not proven in operational environment)[1] at the beginning of the project. Efforts were allocated to increase the TRL of each tool brought to the project and to ensure their collaboration/combination thought the SAFETY4RAILS Information System platform (S4RIS), addressing all phases of a representation of the resilience cycle (Identify, Protect, Detect, Respond, Recover).

Following the presentation of the S4RIS architecture, the coordinator described shortly the four simulation exercises carried out in 2022 hosted by end-user partners, each of which tested and collected evaluation on the S4RIS:

To provide the audience with a global view of the S4RIS functionalities, based on the 19 contributory tools it gathers, the Technical Coordinator (Uli Siebold, CuriX) led a demonstration where the following tools of S4RIS were involved, as follows:

The fictional scenario was developed by the Consortium to demonstrate the S4RIS functionalities in case of a combined cyber and physical attack on a major city’s railways network during rush hour. The chronology of event is illustrated with the below figure:

The hypothetical scenario gathers several aspects of a potential security crisis by combining:

Following the presentation of the scenario timeline, the demonstration followed the chronology of events and enabled to show to the audience when and how each involved tool plays a role in the detection of events and how alarms are communicated from tools to RAM2, and how they appear for the operator.

Following the demonstration, participants had the opportunity to engage with 9 of the SAFETY4RAILS tool providers in the room and learn more about each tool’s objective, function and future development plans. The following tools were presented:

The second half of the day was dedicated to the presentation of the main lessons learnt of SAFETY4RAILS and the project’s recommendations for future work. These lessons learnt were presented by theme, as follows:

The technical coordinator (Uli Siebold, Curix) described the lessons learnt derived from the project content based on the resilience cycle and its five phases. The main issues identified were centred around the availability, security and handling of data.

For a more detailed overview of the challenges in each phase of the resilience cycle, please refer to the presentation available at https://safety4rails.eu/2022/10/01/safety4rails-final-conference-was-held-on-28-september-in-paris-france-at-uic-hq/.

To wrap-up, the Technical Manager also identified potential features to be implemented in a production version of S4RIS, notably around authentication and encryption.

The presentation of the main lessons learnt continued with the end-user coordinator (Marie Hélène Bonneau, UIC), highlighting that:

The presentations on the impact of the project continued with EOS (Angeliki Tsanta) presenting the contribution of SAFETY4RAILS for the compliance of end-users with the European framework on critical infrastructure security (ECI & CER Directives) and cybersecurity (NIS and NIS2 Directives).

In addition, the following policy recommendations were drawn from the experiences of the project:

Last but not least, the main lessons learnt session was concluded by ETRA (Eduardo Villamor Medina)’s presentation of the Go-to-Market roadmap and proposed next steps for the exploitation of the SAFETY4RAILS tools and platform after the end of SAFETY4RAILS project:

The SAFETY4RAILS Coordinator Stephen Crabbe (Fraunhofer EMI) closed the conference with the main conclusions of the project, highlighting the final brochure which gathers the main lessons learnt from the project (available here).

Relying on the positive feedback received during the two-year project, expectations are now to apply SAFETY4RAILS results in real life relying on the S4RIS platform’s high potential for commercial use.

All the presentations given during this final conference are available online at https://safety4rails.eu/2022/10/01/safety4rails-final-conference-was-held-on-28-september-in-paris-france-at-uic-hq/.